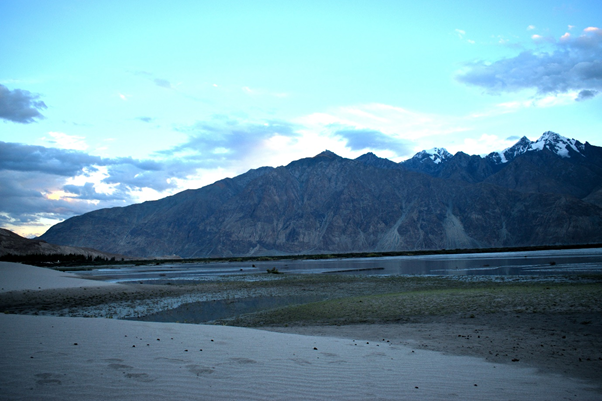 Today we had to leave around 8 AM, considering that we were going to Sumur through Durbuk and this road was likely to have a number of large water streams. I got up at 5:45 AM, could sleep only for a couple of hours yesterday night. The water in the room was almost freezing, so went out to the kitchen to ask the staff to bring hot water. Additionally, asked them to check if our shoes had dried out (those were drenched in the streams yesterday). I was told that hot water will be provided by 6:15 AM, and the staff showed the place where the shoes were kept. They were almost in the same condition as yesterday.

I stepped out for a stroll, there was total silence around the lake – no one was out in the open. There was enough sunlight to capture beautiful morning, with the camera which I did. It seemed like the mountain peaks had received some snowfall in the night.

The first stop for today was Durbuk about 50 km from Spangmik. In the early morning the streams which were swollen up with water yesterday, had less water flowing through them. So, crossing them was litter easier. On the way Manish captured a few photographs of us with the bikes, from long distance.

After riding for a few kilometres, a long patch of mud with water on the road, proved to be quite challenging for us to cross with the bikes going from one direction to other in the mud. A couple of riders slipped with their bikes and fell, I and Lalit and a few other riders who had crossed that patch rushed to help them. We experienced this unspoken brotherhood of riders at many places today.

After crossing this patch of mud, we stopped at a place where a number of marmots were out in the open, probably enjoying the sun 😊. Many riders, and tourists stopped to click pictures of marmots. Marmots are large squirrels and in India, they are found in Ladakh.

This road is prone to landslides and small stones keep falling on the road. One such shooting stone fell on me today, but the helmet protected me.

Durbuk to Agham via Shyok

We reached Durbuk and moved on to the road going to Nubra valley. We crossed an army camp on the road. Shyok village is about 30 Km from Durbuk. The road goes by the side of Shyok river (“The River of Death”) from here on up to Sumur. At some places the river is barely 3 to 4 ft below road level and the river bed is quite wide. Driving on the road, just by the side of river almost at road level with no barriers was an experience in itself. The water of the Shyok was greyish in colour. This river is a tributary of the Indus river.

We came across several large water streams today. Some were almost 100 m wide. These streams had a lot of water and stones, which were causing hard time for the riders and vehicles. Several riders who stopped midstream or applied brakes fell down. The only way to cross such streams is to maintain a consistent momentum of the bike. Pankaj and Chandrakant also fell down in one of the streams. The hero of today was Wayne who crossed the streams with ease and in standing position. A group of riders who had come from Malaysia struggled a lot crossing these streams. I and Lalit helped Chandrakant , Pankaj and a couple of other riders who had fallen down to get up, lifted their bikes and pushed a couple of other riders stuck midstream to move ahead.

At another stream, we saw a Wagon R car stuck mid-stream. Some people were helping to take it out. People from BRO were trying to clear the road, with the help of machines. This road needs to be operational continuously as it links the Pangong Tso, Khardung La, Nubra Valley and Leh. The BRO people working to clear the road told us that they expected more water in the streams in the afternoon and asked us to cross Shyok as soon as possible – which was 18 Km ahead.

We followed the advice, and increased our speed and crossed Shyok village and stopped at a small restaurant by the side of the road, in Agham village. This village is a few kilometres before Khalsar. On the entire route from Durbuk to Agham (78 Km) this was the only place, where you could get something to eat or water to drink, as there are no settlements in between. We ordered maggi and dal and rice.

From here we had to travel another 45 km to reach Sumur, Nubra Valley.

From Agham the road condition improved, there were still broken patches and no roads, but not large streams. We passed through Khalsar and moved towards Sumur. Khalsar is the place from where the next day our ascent to Khardung La was going to start.

We reached Sumur around 3 PM. Sumur is a very small village with population of 1000 people. Turtuk the last outpost on India – Pakistan border is about 100 km from Sumur.  Now a days, many riders go up to Turtuk. Sumur is part of the Nubra valley, a valley formed by Shyok and Nubra (Siachen) rivers. Nubra valley separates the Ladakh and Karakoram ranges. The average altitude of the Nubra valley is 3050 m.

Our stay today was at the Lharjey Resorts. After going through a few narrow lanes, we reached the resort. The hotel staff allocated our rooms and shifted our bags to the room. Hot water was available at the room. We placed order for tea.

We freshened up and relaxed on chairs kept outside the room. The group then decided to visit the sand dunes around sun set, and to use the backup vehicle instead of the bikes.

We left for the sand dunes on the backup vans, some time before the sunset. Chandrakant , Pankaj and Baskar sat on the top of the van and sang many Bollywood songs. Chandrakant is a good singer 😊.

At the entrance of the dunes, we saw Bactrian camels. These camels have two humps on their back. Due to their tolerance for altitude, cold and drought they enabled travel of caravans on the Silk Road.

The nature is at its very best in Sumur. The time of sunset made ours experience truly splendid. We could see natural sand dunes, mountain peaks with snow, clouds, sun setting on the horizon, confluence of Shyok and Nubra rivers and a small green valley at a short distance. Where on the earth you get such a varied combination of natural elements? The almighty has made this place, truly his hallmark creation. The mountains and the sky had turned golden with the rays of the setting Sun. Finally, around 7 PM, the Moon also appeared on the horizon. The words are not enough for description! Just come to the dunes, sit, experience the beauty and do nothing, let the time fly away!! We captured those moments in the camera. A few group photographs were also taken. After the blissful experience, all our tiredness from the day’s ride from Pangong Tso to Sumur vanished. After the sunset we returned to the resort.

After returning to the resort from the sand dunes, we talked for sometime and then moved to the dining area, where wi-fi was available. Using WhatsApp, I spoke with Shilpa and Kundan and sent them a couple of videos of stream crossing. Around 9 PM we had our dinner and returned to the rooms.

At the rooms we talked about the next day’s ride to Leh via Khardung La.  A thought kept me awake late in the night. Assume that you are ascending to Khardung La on a steep incline, and for some reason you had to turn off the engine. After a couple of minutes, you start the engine, in neutral position, press the clutch, first gear and to move further you release both the brakes, for that brief moment how you will control the bike – will the bike move ahead or back? I had asked this question to Manish earlier and he just said, try not to stop!!